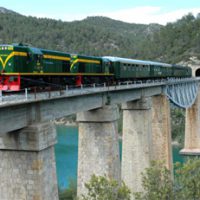 The Tren dels llacs will start its season on Saturday 20th of April and it’s going to end on tne 2nd of november. This touristic service is going to offer 28 trips, most of them with the historical train, and four of them, between the 20th of July and de 8th of August with the regular panoramic train. Time stops at the Tren dels Llacs, the 10817 and 10820 diesel locomotives, dragging four vintage rail cars, return the passengers the nostalgia, feelings and perspectives of ancient times, while they enjoy an unforgettable journey through spectacular scenery. The railway line from Lleida to La Pobla de Segur was a transpyrenean project with the aim of connecting the city of Lleida with Saint Girons in France, through El Port de Salau( Salau Pass) along a route of 89,35 kilometres. This route  offers the passenger a charming journey, and magnificent landscape.  The coach window shows them a nice view of the landscape of great beauty. A land of rugged scenery and wild vegetation, lime walls, controlled calm waters and at the bottom the white peaks of the Pyrenees.

During the journey the passengers taste different products from the areas in which it goes by. The visitors will also be able to discover other activities like a taste of beers from the Pyrenees, the modernist secrets of la Pobla de Segur, the ancient shops in Salàs de Pallars or the nature in la Vall Fosca.

The diesel locomotives used for this journey, the 10817 and 10820 models were built in 1968 and were designed to provide line services and maneuvers. They are also known as “ye-yés”. These diesel locomotives, carry four vintage cars of the 6000 series, a cafeteria-car, where in addition to a spacious bar from which to contemplate the landscape you can find several seats with tables, and finally also incorporates a mail van. 280 people can be carried by this locomotives.

If you want to enjoy this experience visit the website www.trendelsllacs.cat