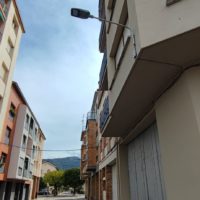 The City Council of La Pobla de Segur is replacing the current public lighting with lanterns with amber LED technology. Specifically, the scope of action is the northern area of Pobla de Segur: from the Corporativa neighbourhood to the Plaça de l’Arbre. It is in this area where the commercial area and most of the municipal facilities are located (Library, Telecentre, Nostra Senyora de Ribera Residence, Casa Mauri, Parc Alcalde Boixareu…) as well as the residential area with the highest population density.

With this action, the luminescent elements will be renewed, which, in general and after so many years, were in poor condition despite the specific repairs that had bee made. In addition, the replacement will mean an energy saving of 26,980W per hour. The budget for the action is 86,532.45 euros and includes both the purchase of the nearly 300 lanterns that will be renewed with the installation.

The lantern, which has been acquired thanks to the purchasing centre of the Catalan Association of Municipalities, complies with the Starlight regulations regarding light pollution and respects the observation of the night sky, since it emits the light flux towards the ground. This action follows the path started in May 2021 when the Raval fanal was renovated.

The La Pobla de Segur Athletics Club, together with the Catalan Athletics […]