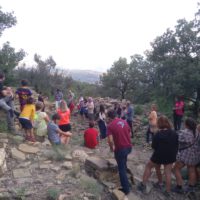 The tasks of excavation, that are done by the Laboratori d’Arqueologia Medieval of the University of Barcelona with support of the City council of la Pobla de Segur, are framed in the project “Alive Mountains: settlements, resources and landscapes in the mediaeval Catalonia (s IV-XIII)”

During the 27th August and 7th September the second campaign of archaeologic excavations in the jaciments of the Pui and the Esplugues de Segur has taken place. A team of 9 archaeologists and students of the University of Barcelona took care of the excavations, directed by the archaeologist Walter Alegría and the teacher of mediaeval history Pau Castell.

The strategies of research, this year, have been different for each jaciment. On one hand, at Esplugues de Segur the strategy has focused on the excavation of a mediaeval pavement in shelter cave already discovered in 2017. On the other hand, at Pui de Segur, the plan of excavation has consisted in discovering and delimit the walls of the enclosed vila named Pui de Segur. Thanks to this the archaeologist have been able to begin to define the morphology of the houses of the village, during the 14th-15th centuries.

The populational sequence that forms the site of the Pui,  Esplugues de Segur  and la Pobla de Segur is a good example of the evolution of the mediaeval settlement in Catalonia, from the shelter cave (Esplugues de Segur), to the feudal core around a church or fort (Pui de Segur) and, finally, to the creation of a market vila (la Pobla de Segur) through a Letter of settlement and frankness.