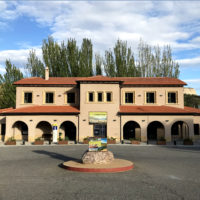 The tourist office of La Pobla de Segur, located since 2018 in the new Sports and Nature Station in the Pyrenees, increases the number of visitors in the summer season by 173%.

Specifically, the increase in the number of visitors served has increased from 1,859 people during the summer of 2018 to 5,070 in the summer of 2019. The previous data shows that the trend was already rising, with an average annual increase of 15% between the years 2015 and 2018.

Currently, the municipal tourist office is located at the Sports and Nature Station in the Pyrenees, a renovated building that also houses the center for cyclists and hikers and an interpretive space for the fauna, flora and geology of natural areas more nearby.

The rehabilitation works of the old train station of La Pobla de Segur, carried out through the Green Pyrenees Slow Tourism (GPS Tourism) project, have allowed the revitalization of this building that had been closed since the late 80s, in order to promote the principles of tourism ecomobility and promote the conservation values ​​of natural and cultural heritage among the population.

GPS Tourism is an international cooperation project funded by the ERDF fund within the Interreg POCTEFA program. The works have been co-financed by the Generalitat of Catalonia and promoted by the Pallars Jussà Regional Council, the main partner of the project, with the collaboration of the City Council of La Pobla de Segur.