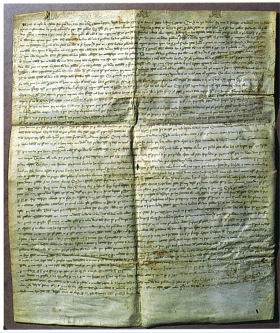 The origins of la Pobla de Segur trace back to the place called les Esplugues de Segur, a village built in a rock shelter at the bottom of la Roca Foradada. This was a common model of settlement in the Pyrenees during the Early Medieval Age. Documentation from 976-978 dC quotes les Esplugues de Segur (Spelunca Sequni in Latin) as the location ruling over a large district named Segur. Les Esplugues de Segur was an important location, dedicated to shepherding and vine growing.

Around the 11th century some sources mention a new feudal location in the term of Segur (at present days known as el Pui de Segur) linked to the romance Church of Sant Miquel de Segur (at present Sant Miquel del Pui). It seems that there was a stage of transition between the two locations, les Esplugues and the feudal location of Segur, in which both were inhabited, although Segur progressively prevailed. There is evidence that the location of Segur was important, as the presence of public scribe and public notary. Also a knight commander of the Hospitaler Order in Pallars was born in Segur. Segur was part of possessions of the Viscounts of Vilamur, one of the most influential noble families of the medieval Pallars.

With the beginning of an emerging capitalism and mercantile economy, market towns gained importance as centers of economic activity. By then, some farmhouses were already located in the low area of the Segur territory, named la Ribera (the riverside). Is in this moment, in 1268, when Pere, viscount of Vilamur, through a Town Charter, gives a series of town privileges to the present and future inhabitants of la Ribera de Segur. The goal was to favour the settlement in the lowest zone to form a Market Town in the heart of the Pallars. That new Town will later be called la Pobla de Segur. 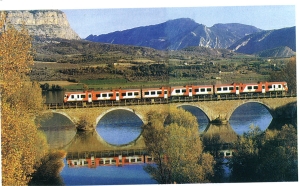 The census of 1380 assigns to la Pobla 12 fires and 6 to the feudal village of el Pui de Segur. Later censuses, of 1553 and 1595, attribute to la Pobla 51 and 39 fires, respectively. La Pobla de Segur develops as a Closed Town, around the market square and also in a suburb around the first church devoted to the Virgin of Ribera, since then patroness of the Town. The census of 1718, the first that counts inhabitants, indicates 500 neighbors. Its importance is notable since the beginning of the 16th century. To the main activity of agriculture adds the industrial activity: looms of wool and of linen, fulling mills, turns for wool card, and mills of olive oil and cereal flour.

The Comú de Particulars, created by the neighbors the year 1823 to build a mill of flour of communal property, awards concessions to the industrial sector of the village favoring the establishment of several industries: chocolate, pastas, wool, mills of oil and flour or wood sawmills, amongst others. With the years the Comú will become the core of the social and civil life, with an active cultural role.

At the beginning of the 20th century the hydroelectric works that begin in 1911 transform the area. The Pallars becomes the biggest producer of electricity that will feed Barcelona industry. The hydroelectric power plants of Capdella, Molinos, Talarn, la Plana Montrós and la Pobla generate an important socioeconomic change in the territory, with the arrival of big masses of population that will work in the power plants and other industries. La Pobla will be the center of this industrial activity. However, the building of the dump of Sant Antoni ends with one of the most characteristic activities of the local economy: the fluvial transport of wood, by the Raiers (timber raftsmen), and the replacement by road transport.

During the Civil War, la Pobla is placed initially in republican territory, as the rest of Catalonia. In April of 1938 the fascist army occupied the town and the other main towns of the Pallars (Tremp, Sort, Llavorsí and Esterri d’Àneu) and constituted a front line that would be fortified in all the ridge from Serra Mitjana to Massís de l’Orri, by Serra de Carreu, Sant Corneli and Boumort.

Another important date in the history of the town is the arrival of the railway from Lleida in 1951. That railway will convert la Pobla in the logistical centre of the Western Catalan Pyrenees during several decades.