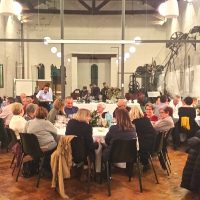 Among the acts of the Pallares Cordevi festival, this past Friday, at he Molí de l’Oli de la Pobla de Segur, the third edition of the Gastronomic Dinner of l’Oli took place, organized by Al teu gust (food from Pallars), Àpat (Association of professionals in the tourism field of Pallars Jussà), Oli Pallars (Association of Oil Producers of Pallars) and the Town Hall of La Pobla de Segur.

The dinner consisted of a tasting of three olive oils (from the producers of Cal Portalé, Cal Boix and Cal Borrech), three starters, a starter, two seconds and desserts, elaborations in which the oil was one of the protagonists and which were cooked by the chefs of the Cuineta de la Pobla de Segur, Casa Masover de Buira and the Hotel Solé de La Pobla de Segur and assited by members of the Pallars Hospitality School.

Due to the demand from interested parties around Pallars, the capacity of the event had to be expanded to the maximum that the venue allowed.

Both the producers, as well as the restaurateurs and the organizers had the approval of the diners and were highly applauded.

The raiers of the Noguera Pallaresa, on the verge of being declared Intangible Heritage of Humanity by Unesco

Among the acts of the Pallares Cordevi festival, this past Friday, at […]